A lot of people playing Totem Topple have commented that they’d like a slower paced game. One where they can sit and think tactics, and where reaction times aren’t so critical to success.

Rather than change the game completely, we decided to add in a new mode. We dubbed it “Strategic” mode, owing to the slower, more cerebral type of gameplay we were looking to create. Initially, strategic mode consisted of slower enemies and longer times between waves, to give the player more time to plan what they would do next. We also set the head-selection to not randomise after each placement of a new head/wing/beak to the totem pole. Instead players would be presented with four heads/wings/beaks and then choose which order they could place them down in. 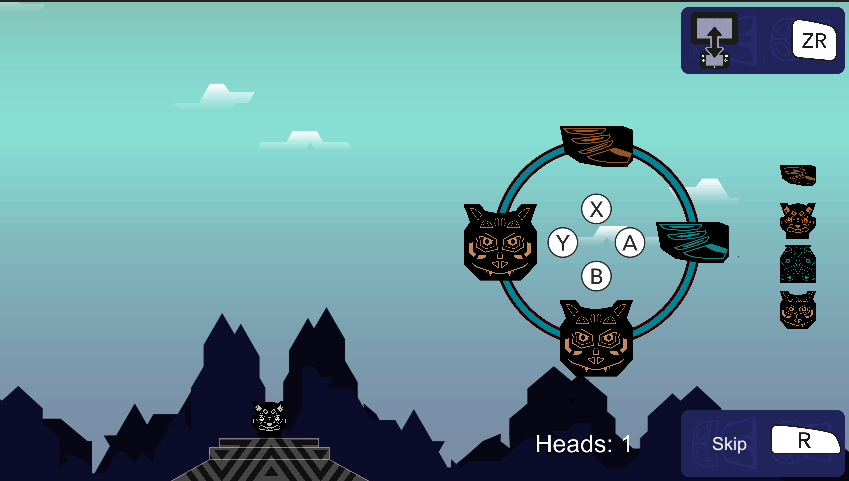 However, the changes didn’t quite achieve the results we were looking for. Instead of giving the player time to think, the slower enemies at the start of the game, gave players the chance to slap down a load of heads unchallenged. Sometimes they’d built a super strong totem pole that shot every enemy before it could reach the base. Other times they’d continue straight on past the red line and be devoured by a bunch of super-hard enemies. In both cases, the link between enemies knocking down the tower and the need to then build back up the tower was broken, leaving players confused as to what they should be doing.

Another problem was that the enemies would still spawn at the same rate. Once the first enemies did eventually reach the totem base, the game became just as frantic as before. Longer intervals between spawns conversely gave players too much time to recover and rebuild their totem pole.

The extra choice given to the player of which order to place the heads etc similarly fell flat. With just four options, there was a very limited number of combinations. Neither was it particularly clear how different combinations made an actual difference to the game. And since the four options were randomly picked for the player, there was no sense of player agency.

We tried a system whereby players could see the next four heads coming up after the current four, so be able to plan a bit further in advance. And we added the ability to “skip” to the next set of four, in return for a time penalty before players could pick another head. Unfortunately, this still didn’t have the desired results. Players were still restricted to what felt like arbitrary choices.

So we decided to give players the option to choose any head, wing or beak they liked, at any time. To balance this, we introduced a currency system, with a cost to placing each different totem piece. Players then earned currency by destroying enemies.

We were a little reluctant to do this, as to an extent, it doesn’t really fit with the original intention and vision for the game. It turns it into something much closer to a traditional tower defence game (hence calling this mode “Classic”).

However, from a gameplay perspective, we feel it works well, and definitely gives the player both a greater sense of agency, and the ability (along with the pause-help system) to really take their time and plan their next move.