This week, we’ve been participating in the LeapMotion Game Jam, adapting our game to use the motion control device. It works remarkably well!

Whilst we’ve only announced the game for Wii U so far, we couldn’t pass up the opportunity to get our hands on some cool motion control technology that the LeapMotion provides.

On a basic level, the LeapMotion is a little blocky device that detects hands hovering over it, tracking their movement as well as the movement of individual digits and joints. It’s been out for a while, initially being touted as the first half of the cool looking holographic UI’s seen in many a sci-fi movie.

Although UI designers might argue that the ergonomics of such interfaces are deeply flawed, the LeapMotion is more than that, and really is only limited in its uses by what developers can imagine. 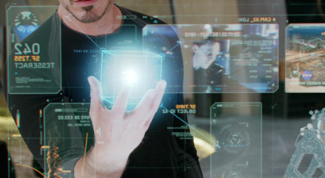 To that end, LeapMotion have launched their 3D Jam competition to help spur developers into thinking of new and innovative uses for their device.The other angle to the jam is in using LeapMotion to plug the gap in VR development where there is otherwise a lack of suitable input devices. The Leap Motion device sitting on the front of the VR headset and allowing developers to see their hands in front of them.

Personally, I’m slightly cynical about VR technology, in the sense that it’s exponents come off as being technological perfectionists. Allowing existing design paradigms (specifically first-person perspective games) drive development, rather than letting VR be its own thing, and force designers to be creative within the limitations of the system. If having to be imaginative with using existing input devices is what’s needed, then all the better.

For us though, our game is already designed for motion control, so the easy with which we’ve been able to sub in the LeapMotion for Wii Remotes has validated many of our design decisions.

We even managed to get the multiplayer mode working, though with four hands all vying for attention within the LeapMotion’s slightly limited detection range, the constant loss and re-detection of different hands quickly mixes things up till everyone is controlling a different character to the one they started with! Still, as in the above video, it works great for two players.

Next step will be to neaten up the game in terms of UI and playability when no one is around who has played the game before to necessarily teach others how to play. (Something that’s a really big problem for the game anyway)