There’s nothing like testing with real users, and demoing Colour Park at the Insomnia52 Gaming Festival highlighted a number of unforeseen issues

Last weekend, I demoed Colour Park at Insomnia 52 Gaming Festival in Coventry. Top of the list of things to test were the colour blind modes. Whilst something in the range of 1% to 5% of men are colour blind (it’s very rare in women), the degree can vary between individuals, all the way from some colours being slightly weaker, all the way to being utterly unable to distinguish between certain colours.

Colour.. It’s in the name

In the case of Colour Park, and it’s dependency on colour, some people who were just a little bit colour blind/deficient actually preferred the full-colour modes. Whereas others who I tried on both colour-blind and non-colour blind modes, were clearly benefiting from the colour-blind-friendly palettes. Whilst not especially scientific, the testing confirmed my view that letting people choose their own colours (with properly set up defaults / presets) was the way to go. 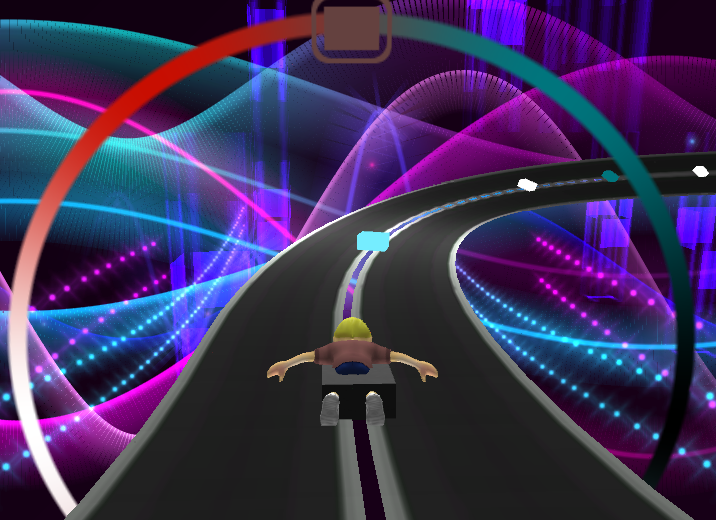 Tritanopia – One of the rarer forms of Colour Blindness

I also had some really useful discussions about a different way to solve the problem. Specifically replacing the blocks on the track with arrows, pointing at the angle the player needs to rotate their colour wheel to.

Not only does this remove the total reliance on colour in the game, but makes the game easier as well, giving more cues to the player about what move to make next, versus only going by what colour the approaching block is.

This should hopefully help with my second big observation, which is that the game was too hard! In particular, I’d set people up to play race mode, and with settings that ramp up the speed (and thus difficulty) quite sharply. Once the player gets a few blocks in a row, they really start to zip along.

That’s great for giving the game a sense of flow and adrenaline pumping action. Less so for kids. The  game requires both fine motor skills and quick reactions, neither of which kids under about 10 or 12 years old have.

Also up for consideration is introducing a “Super-easy” difficulty setting, which has just two colours on the colour wheel. The problem is that the game’s premise hangs on motion as an analogue action, which has a full, continuous range of inputs: The closer you are to a colour, the bigger your speed boost and the more points you get. With just two colours, players can just push the Wii Remote to one extreme or the other. It removes a large element of the skill from the game, making it a simple reaction game that could probably be played with any old regular digital controller (press button A for green, B for blue). 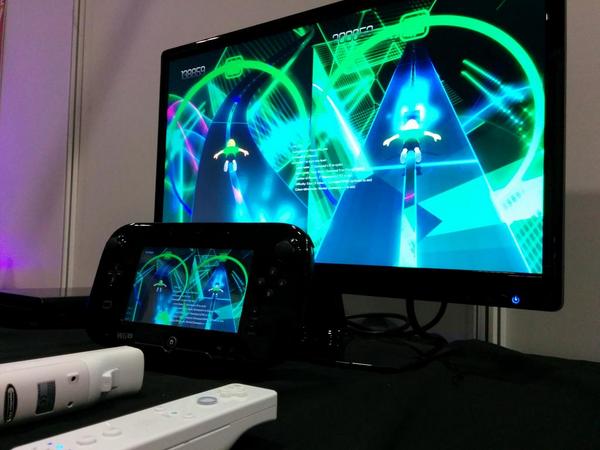 At the other end of the spectrum, teenagers and adults were largely able to get the hang of the game, and generally responded really positively to the game, often offering up that they really enjoyed it (or at least liked the concept).

However, I’d set the game up to have a run time of about 2 or 3 minutes for a single race to the end of the track, after which the game would declare a winner and points score. Typically, after just one or two play-throughs, people would put the controllers down satisfied that they got the idea of the game, and then wander off to see what other games were on offer.

Compare that to the other indie games in the area around me, and people would sit down to play them for stretches of 30 minutes or more. It’d be easy to dismiss that as down to the nature of the different games, with the puzzle platformers or FPS games around me somewhat demanding that players get to the end of their respective levels.

In reality, the game is not engaging enough. Part of that is down to the way the game was set up. Players would spend the first minute or so learning the colours. Then there would be maybe another minute of play – just enough track for them to get good at the controls and the game produce a satisfying sense of accomplishment when the end arrived.

Leaving rhythm mode aside, the race mode needs more to compel people to want to play again. A fixed track (as opposed to a random, procedural one), with splits that allow players to take different paths should give players an extra layer of information to learn, and give them more choices in the game. Equally, having the track as a loop, with races over multiple laps, will allow players to correct mistakes (e.g. from taking the wrong path last lap,) within a single race, rather than having to wait for the next one.

Other things, such as indications of whether a player is 1st, 2nd, 3rd etc, and ghosts of the other players zooming past them on the track should make the game feel more competitive. Having sections without blocks, so players can take a breather, will also help, as they can take stock of how well they did in the section just completed, and also compare their progress against everyone else.

There are other options, such as multiple “lanes” on the track, which players can switch between using the buttons on the Wii Remotes. Though at that point, the game starts to look like it’s wholesale ripping off Audio Surf, rather than just taking inspiration. For now, the target will be to have people playing 30 minutes or more over multiple races.