Introducing damage types into Totem Topple proved to be a relatively quick way of creating more variety and dynamism within the game. It allowed for new and interesting enemies to emerge later on in the game, and added an extra dimension to the game without burdening the player with too much extra to learn.

Originally, the plan was that whatever damage type was selected when the player placed a beak (turret) or wing, that would be it’s damage type for life. However, this lead to issues whereby players would be stuck with a lot of ineffectual turrets that didn’t match the damage type of the latest wave of enemies. Or worse, not have enough supplies to build more beaks for the incoming enemy damage type, and be unable to collect any more due to being unable to kill those enemies!

Furthermore, it hugely complicated the tower building elements of the game. Since the game doesn’t have an undo function or any way to adjust the tower once built, having to account for different damage types in different places on the tower just put the game that bit beyond the player’s easy understanding. Placing mismatched wings and beaks on either side of a head because you forgot you’d changed damage types gets old really fast.

As well, firing in Totem Topple is done by simply aiming all the turrets at a single target. It doesn’t make much sense firing every damage type at an enemy when the player knows only a few arrows will have an effect. Especially if there are, say, both fire and ice enemies on screen, the player is better off letting the arrows shoot their respective damage types automatically. Rather than half their effective firepower by targeting a single enemy on which half their arrows will be ineffectual. That takes away the fun and point to being able to target specific enemies in the first place.

Instead, having a single damage type fired by all beaks made both play and implementation that much easier. However, allowing players to constantly switch damage types made things too easy. It took away the challenge of managing damage types, as the player could just spam the button to change damage type to whatever.

The idea of giving the player a limited number of changes in a given time period came about more by accident than design. Copying the other buttons used to build heads/wings/etc meant the change damage type button inherited a cool-down timer. That on its own was too harsh on the player, as often they needed to cycle between a couple of damage types to get to the one they wanted. Giving them a small number of changes, that would then replenish slowly over time, gave just the right balance. Forcing the player to be conservative with their damage type changes, but not to the point of being punishing.

Some years ago, I participated in a game jam using Eye Tracking technology. My team’s game was a horrible mess, but the eye tracking technology itself was far more responsive and accurate than I anticipated.  When it came time to port Totem Topple over to PC, I decided to have a go at integrating eye tracking, just for fun.

I used the eye tracking to let the player target enemies and shoot all arrows towards that chosen enemy until it was dead. After which the arrows would revert to their usual patterns until a new enemy was targeted. The result was really fun, to the point that people would forget the actual tower-defence and building aspect of the game, especially in Classic mode, and just have a great time shooting as many enemies as they could. 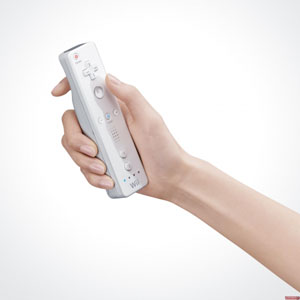 Later on, when creating the Wii U updates for Totem Topple, Wii Remotes proved a relatively straight forward substitute in for eye tracking (which Wii U doesn’t support). Pointing the Wii Remote at the TV and letting one player direct fire, whilst a friend or family member concentrates on building the tower and controlling damage type dealt, added a surprise extra social dimension to the game. In Off-TV mode, the enemies are seen on the Wii U GamePad, and the player can tap on the GamePad touchscreen to target them. Equally for the non-eye tracker PC version, players click with the mouse on enemies they wish to shoot.